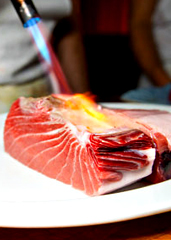 There’s an old saying that goes, “When sushi is mysterious, everybody wins.”

We heard a guy say it once.

Okay, we made it up.

Say hello to Sushi Belly Tower, a roving secret society of raw-fish dinners and acoustic rock by way of LA, going on through next weekend at [REDACTED].

These guys made names for themselves pulling this stunt on an anonymous rooftop in downtown LA. The chef was an Olympic distance runner who got really into slicing sea life. Then one thing led to another and, boom, hidden sushi dinners with live concerts and unlimited sake and whiskey. Which… are now here for a bit.

You’re looking for an abandoned Tribeca loft tonight and an undisclosed Gramercy space tomorrow. Or you could just email them here and RSVP (your choice). They’ll give you a password and more helpful directions. Then you’ll show up and whisper said password to a burly gatekeeper.

Once you’re in, it’s you, about 39 other shining faces and a live acoustic band rocking out (Hendrix covers included). It’s all followed by numerous rounds of blowtorched tuna fat and delicately prepared yellowtail delicately picked up this morning from New Fulton Fish Market.

Don’t ever say LA didn’t do anything for you.

Close your eyes. Enjoy the breeze.

Hello. Welcome back. Right. On to