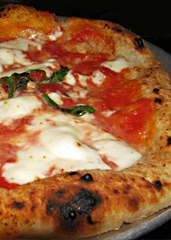 It’s Friday. Let’s do something sacrilegious.

We know what you’re going to say: eat a bowl of soup on the 6 train.

Well, he’s the guy with the stones to deep-fry a pizza.

And he’s the owner of La Montanara, the world’s first/only pizzeria dedicated specifically to the fried pie, opening Wednesday.

Before you huff and puff, perhaps consider the late-night implications of this. Okay, now factor in that it’s located on Ludlow, open long after last call and operated by the same man who’s behind Forcella…

… And, why yes, that is potential you smell. Also, flash-fried salami piccante pizza that’s been cooked in sizzling sunflower oil and then baked in a 900-degree oven.

All in all, this stuff isn’t a whole lot different than a regular margherita (assuming that regular margherita is made by a master pizzaiolo who was born and raised in Naples). It’s slightly crunchier, slightly sweeter, and the crust is a golden, crackly brown. In other words, takeout (they also do rice balls and pizza-dough sandwiches) from this 12-seat spot goes great with a beer. Or in a few weeks, a ball game.

Watching, that is. We don’t recommend eating while playing shortstop.

Members and their guest receive a
19 Views

Members receive 20% off the full
20 Views

Members receive 10% off final bill and a