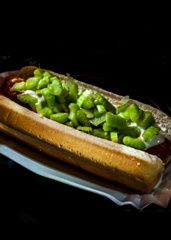 None of these innovations come anywhere close to topping this…

It’s The Catlin Dog, a deep-fried, buffalo-sauce-coated hot dog that happens to be your ticket to Super Bowl–party legendry, available for game-day parties through UD Perks.

Here’s the rundown: start with your standard Crif dog. Then coat it in pork rinds and fry it deeply. Next: toss in some buffalo sauce from the folks at UES wing favorite Bar-Coastal (owned by a chap named Catlin). Finally, the coup de grâce—a dollop of blue-cheese sauce and freshly chopped celery. It’s… beautiful. And it’ll soon replace “apple pie” in the phrase “as American as apple pie.”

Just one thing—you can only procure this culinary revolution by getting the Crif Dogs Super Bowl Pack from our good friends at Perks. It’s a dozen of their specialty dogs (yes, including the Spicy Redneck), plus tots, fries, chili cheese and slaw.

A day before game day, you’ll schedule a time to pick up your pack from the Crif Dogs truck, parked conveniently outside their East Village doggery. On Sunday, you’ll don the eye black, emerge out of your giant homemade inflatable helmet tunnel and pick this bad boy up.

You know how Abe Froman is the Sausage
6 Views

Call someone. Someone you’re fond