Every Kind of Entertainment + Cocktails = Salzy 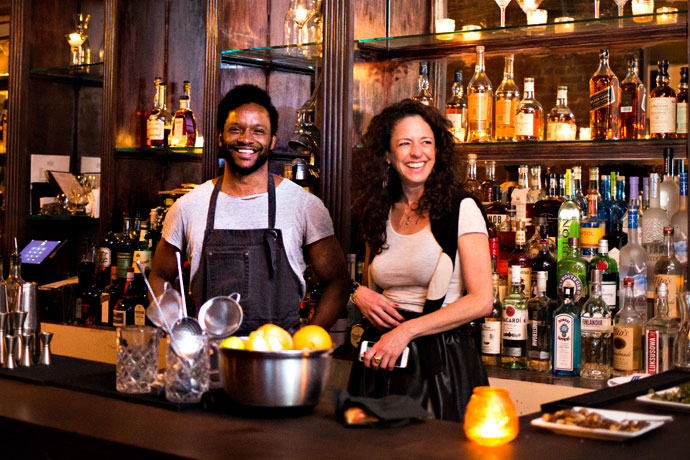 8 Photos Salzy
What in the name of paintings of John Turturro as a Roman emperor is going on?

It’s almost as if the silver couch has taken over and installed an ostrich meatball regime.

This hallucination brought to you by Salzy, a cocktail bar that also functions as a home for all sorts of entertainment and comes stocked with all the weird things mentioned above. It’s open now in Park Slope.

A comedian by the name of Jennifer Salzman is responsible for this, hence the name. She apparently imagined a place where things you laugh at, live music, burlesque and happy hour yoga can live in harmony on a stage in the back of a bar. She imagined it well (take a look around).

Begin at the bar, with a helping of ostrich meatballs and perhaps a Frothy Bitch. That’s a cocktail of bourbon, Cointreau, ginger and egg white. The Turturro painting we referenced earlier should make itself obvious to you. It was given as a barwarming gift by a neighbor, which serves as a reminder to all of us that we ought to get to know our neighbors better.

After bar time, move, in a slow-motion, head-on shot, through a soundproof curtain and take a seat somewhere. Our pick would be that silver couch.

And that about covers it.

Bonus: get a look at Salzy in action right here.