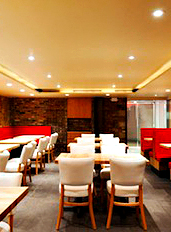 Visions of perfect noodles and pork.

If you were psychic, you’d be having those by now.

But you’re not. Probably. So we’ll just tell you they’re coming…

By now you know Ippudo’s perpetually long-lined 4th Avenue spot. Now there’s this other one. A slightly smaller, streamlined version on an out-of-the-way block of Hell’s Kitchen. One that’s just perfect for casual dates that… somehow end up in Hell’s Kitchen.

There are a few additions hither—a garlic-sautéed lamb chop here, a pork tenderloin over grilled ramen there. But mostly, you’re still coming for tonkotsu ramen. You’ve got a sparse three options now (all pork-based), with some veggie options forthcoming.

There’s a small dark bar at the entrance (try the shishito-tequila cocktail). Pass through to the hostess stand, where they’ll first loudly announce you to the room in Japanese, then lead you to either a light-wooded ramen bar straight ahead, or a low-slung dining room of red leather banquettes and booths to the left. Be legit. Go for the ramen bar. Sometime in August, they’ll open an additional 10-seat ramen bar upstairs.

Noodles are better at elevation.

Members and their guests receive 20% off
14 Views

Members and their guests receive a