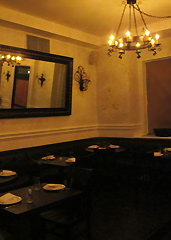 You’re not the type to stand in the way of taco progress.

In fact, it was your viral salsa meme that led to the success of both the breakfast and Choco Taco.

So when a tortilla destination debuts hawking never-seen taco fillings in the West Village, we’ll know exactly where to find you.

It’s the classic tale of liquid-nitrogen-wielding dessert wunderkind turns czar of savory Oaxaca cuisine. Gone are the chemistry sets and hydrocolloid sorbets. In their place: the kind of intricately flavored lamb barbacoa and octopus sesame ceviche that’d require a lifetime in Mexico City to master. Or one really long lost weekend.

So you’ll come here prepared to play maestro to a leisured self-made tasting menu. And once you’ve established yourself in the corner leather booth near the black oak bar, signal (or just verbally communicate with) the waiter to start shuttling over tacos. Start simple with something like the Fish Tempura. Then advance to Beer Braised Tongue. And finally, end with the ethereal Griddled Head Cheese.

You know how Abe Froman is the Sausage
6 Views

Call someone. Someone you’re fond