Cocktails by Wonka in Clinton Hill 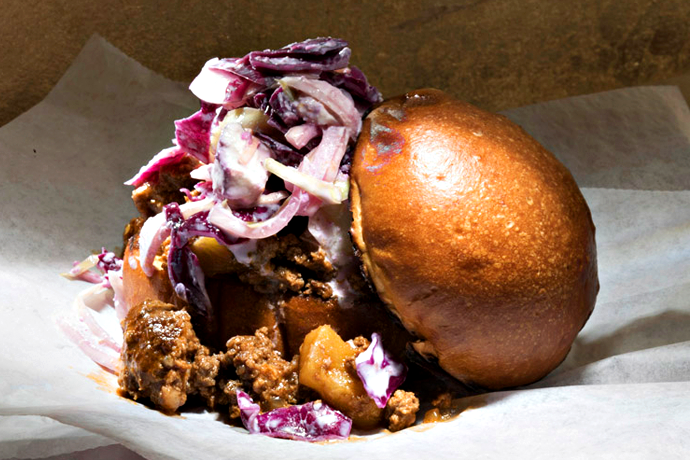 7 Photos Until Tomorrow
It was either Jimi Hendrix or Silverchair who said, “Wait till tomorrow.”

Actually, it was both.

And that’s the tenuous connection we’re making today to Until Tomorrow, a neighborhood cocktail bar that simply isn’t fucking around. It’s soft-open now in Clinton Hill.

The man behind the bar here used to be behind the bar at local favorite Erv’s on Beekman. Taking a look at the menu, you can imagine the guy just saying, “Fuck it, let’s toss some scallions in there,” and somehow making it work. For example… there’s a cocktail with scallions in there; it’s called It’s the Catalina Wine Mixer, and it’s got tequila, gin, pepper jelly, Kina d’Or, Ancho Reyes, walnut liqueur and that scallion, grilled. Similarly high-minded drinks dot the menu.

They’ve also casually dropped an executive chef from Blue Hill and Luksus into this cocktail bar, like that’s no big deal. So have faith in the al pastor sloppy joe and the curried chicken fajitas you spot.

Despite the too-good-for-a-bar food, there’s no mistaking this for anything other than a bar (just look). Most of the space is bar. There’s a small communal table, but, in short, bar. So use your patented belly-up move, bring a couple friends, prepare your strategy for becoming a regular and revel in the fact that you can ask for a drink called Worst Job Since Keymaster.

2017: the year of Say Anything–themed cocktails.