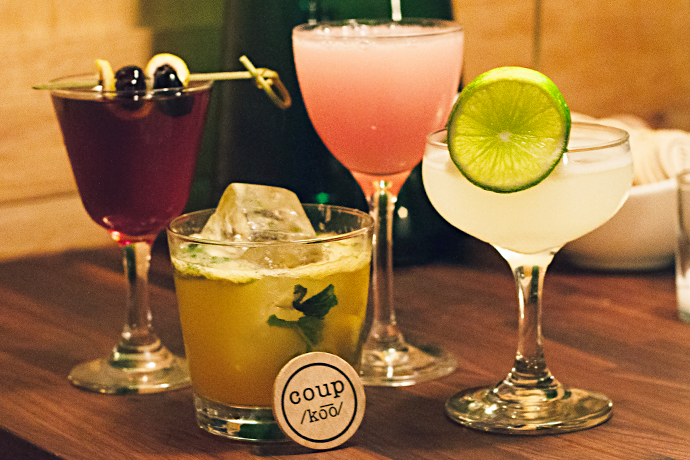 7 Photos Coup
If we were to put things mildly, we’d call our current presidential administration “divisive.” At least here in our fair city.

If we were to put it more bluntly, we’d probably lose all our advertisers.

But now, apropos of nothing, we’ll tell you about Coup (as in d’état), a Ravi DeRossi– and Sother Teague–helmed cocktail spot whose mission is to fight the Great Failed Yam Casserole by bringing in the best mixologists from all over the place to quench your thirst. It opens tomorrow in Cooper Square in what was, until world events conspired, Bergen Hill.

From a purely aesthetic perspective, you can expect two literal bars—one for the house cocktail list (here) and for whatever the guest bartender of the evening is cranking out, the other for getting tokens (more on that later). They’ve kept the tufted blue banquettes of the Bergen Hill era, but now the walls are covered in rolls of butcher paper adorned with a greatest hits collection of modern protest messages (there’s a lot of butcher paper).

Given these guys’ background, you might expect the guest bartenders to be on the impressive end of the spectrum, and if so, you guessed right. Nitecap’s Natasha David, Death & Co. cofounder David Kaplan and Jim Meehan, among way too many others to list, will all make appearances. Teague’s no slouch either.

From a larger perspective, know that every last dime of profit made from your imbibing goes to programs and organizations that are being defunded or lining up against administration policies. Whenever you get a drink, you also get a token. Then you put that token in any one of the jars you see around that second bar, each representing a different organization.

At least we’re in a golden age of philanthropy.