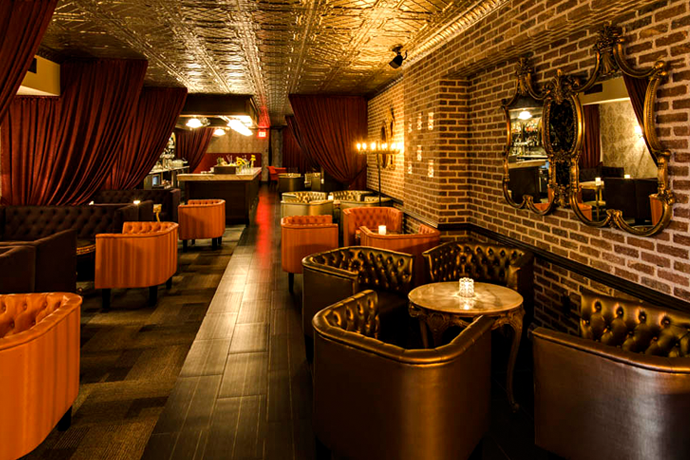 11 Photos The Last Word
It’s becoming increasingly difficult to find reasons not to go to Queens.

And we’re in favor of this, because the more boroughs that have stellar cocktail bars hidden behind hardware stores, the more enriched all our lives become.

Which brings us to the Last Word, a true speakeasy hidden behind things construction workers need. It opens tonight in Astoria, right across from MP Taverna.

Just walking in, you’d think this was a hardware store, because it looks like a hardware store, and the facade is from an old one that existed a few blocks away. Unfortunately, if you’re looking for a hacksaw to pair with your beverage, you’ll have to steal it, because nothing’s for sale anymore, thus denying you the priceless opportunity to say the words, “Hey, I’ll be back soon. Going out for a drink and a box of hex bolts.” Damn it.

So ring that bell outside said hardware store, and someone will kindly grant you access to a dark lounge replete with tufted seating apparatuses, curtains and an elaborate gold ceiling. Classic speakeasy.

Once there, if you feel an overwhelming urge for cocktails from a Raines Law Room alum, that’s just awesome, because that’s what you’ll have. Such cocktails include the eponymous Last Word—green Chartreuse, maraschino and fresh lime zest; and the Posada Punch—blanco tequila, rum, watermelon juice, maraschino, fresh lime juice and a chili salt rim (seen here, along with the whole place).

We also recommend venturing into the “Feeling Adventurous” portion of the menu, because you don’t want to be on your deathbed regretting never having tried something mixing apple-infused bourbon, cinnamon syrup, Angostura bitters, mole bitters and peat rinse. They call that the Southern Gravity.

Let the humor of that one sink in.