Pinks Has a Secret 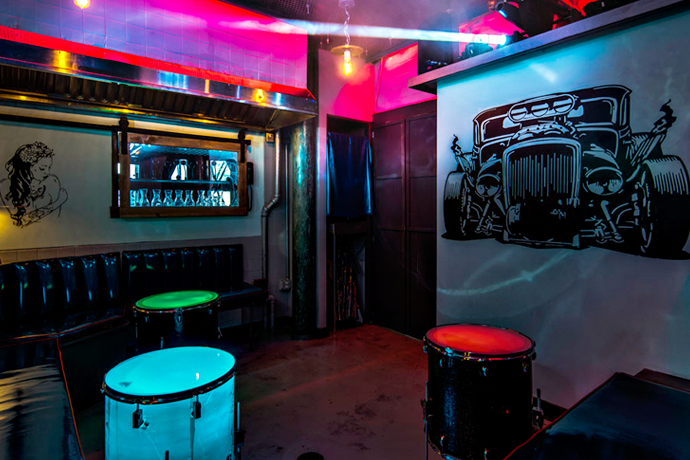 7 Photos The Body Shop
First, find Pinks. It’s that East Village bar with a little bit of a garage vibe going and the killer chili.

Then, walk through and ignore Pinks.

And… there. Right there, through that unmarked back door.

That’s The Body Shop, a tiny hidden place for you and 14 other people, tucked into the back of Pinks. It’s opening tonight.

Once inside: vinyl banquettes, LED-lined drums as tables, a giant car mural, everything obscured just so by a smoke machine. Kitschy in a self-aware kind of way (take a look). The menu’s the same as at Pinks, but they’re happy to do things large-format. (Meaning tacos come in the form of eight-taco platters, and your chips arrive in giant buckets, alongside guac, Mexican hummus and spicy corn salsa.)

To order, pick up that phone on the back wall and let a bartender know you want one of those strawberry-coconut-rum frozen drinks, one of those tall blue drinks with the pop rocks rim and that aforementioned taco platter. Or, you know, whatever it is you do want. When it’s ready, it’ll all come flying in through the sliding window. And there you have it—Pinks’s secret.

Be sure to tell only your 14 closest friends.