Sir Henri Is a Hotel Rooftop 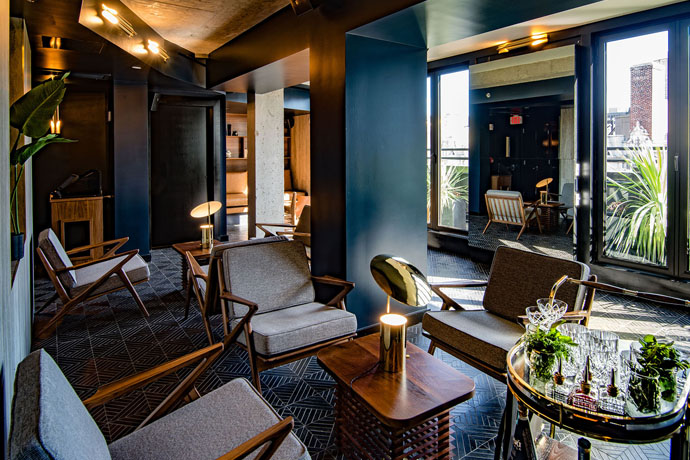 Beautiful day to be looking over the rest of the city, legs crossed on a Z lounge chair, stiff drink in hand, owning your destiny and feeling like you’ve got it all figured out.

If the still drink is an entire honeydew full of tequila and with a tiny paper umbrella protruding from it, that makes it funny too, which is all the better.

This fantasy brought to you by Sir Henri, the comely rooftop cocktail bar perched on Hotel Henri in Flatiron, where you’ll bring your next date for drinks and first-class lounging. It’s open now and waiting.

Think of this as Flatiron’s verson of the Roof at the Viceroy in Midtown. You won’t find any obvious signs for it, but you’ll take the elevator up to the penthouse for access. Once there, you’re in a dim space full of sexy corners and mid-century recline (have a look around), and Gil Bouhana, of Milk & Honey, among others, is in charge of your drinks.

That honeydew number we mentioned before is called the All In the Honey is lime, dill aquavit, tequila, fresh dill and sparkling wine in a honeydew. But Gil’s favorite is the Smoked Basil Fix, which is lemon, smoked demerara, basil, mint, bourbon and nutmeg. That sounds much more like a fall/winter drink than we’d want right now, but we’re not about to argue with Gil. Here’s the full menu for you.

To fortify, there’s whipped ricotta toast, a burger, and things of the like from the Shay & Ivy chef, that spot being just downstairs. Mostly though, you’re here sipping and gazing, maybe discussing real estate or current American political discourse.